LUXTECH is Set for Expected Record Growth in LED Market

Philadelphia, PA – February 18, 2016 – LUXTECH, a leading American manufacturer of integrated LED module technology, closed another round of funding in less than three weeks and is well-positioned for rapid expansion.

Since its inception in 2012, with an initial investment from Ben Franklin Technology Partners of Pennsylvania, LUXTECH has experienced explosive growth. The company’s disruptive technology, which eliminates the need for bulky LED drivers, is fast becoming a recognized standard component inside luminaires of leading US lighting manufacturers.

According a recent feature article in EDN Magazine about LUXTECH, “The design offers manufacturers lots of other advantages, including higher reliability, a smaller form factor and a dramatically lower solution cost than conventional designs.” EDN also named LUXTECH’s Direct-AC Module as “Hot 100 Product” of 2015.

According to Founder and CEO Sean Darras, “We see ourselves as the ‘Intel’ of the LED lighting industry, offering integrative technology that inspires our customers to develop completely innovative lighting systems, with faster delivery times and fewer parts.”

In 2015, LUXTECH accelerated their hiring pace of engineers and business development personnel. Luxtech has added 5 new members to its team in the past 6 months, and is interviewing for additional engineers and salesmen at their head office and research lab, located in the Philadelphia Navy Yard.

“We are committed to accelerating the adoption of LED lighting. And we work hard to find top lighting engineer talent across the country,” explains Darras.

LUXTECH, which already has a number of patents, is on track to introduce several innovations in 2016, in line with the next major disruption: The Internet of Things. As luminaires are increasingly connected, there are unlimited possibilities to integrate, monitor and control the interior environment with human-centric lighting. LUXTECH plans to integrate sensors, control logic and communication interfaces into a standard product—such as an LED module for downlights—early this year.

Select which products you’re interested in and drop us a line! Can’t find what you’re looking for? We’re here to help, offering custom, made-to-order modules. 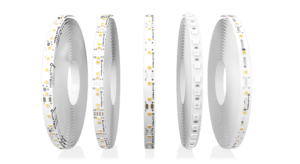